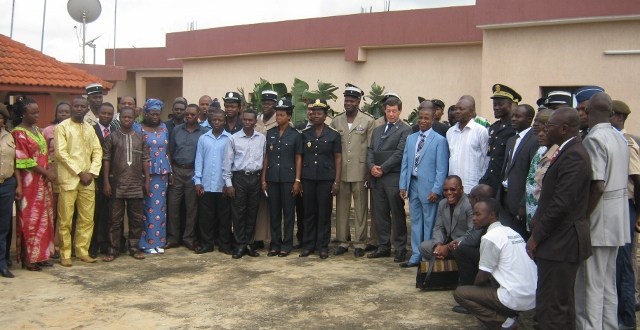 Respect of human rights and justice administration: YMCA Togo organised a two day exchange workshop for actors of the penal chain in Lome

Sixty actors from the criminal chain namely judges, clerks, police officers, prison guards and other personnel of prison administration from 4 regions of Togo gathered for a two day workshop from 12th to 13th June 2014 to discuss the theme of « respect of human rights and justice the administration ».

Planned for 666 people, the Lomé prison today has more than 2,000 inmates. Difficulty to access  documentation and communication means by magistrates, non-compliance of the criminal Code and Criminal Procedure by some police officers, difficulties of collaboration and leadership conflicts between actors in the criminal chain are among others the main causes of prison overcrowding that results to degrading and inhumane detention  conditions in prisons.

Research indicates that the rate of pre-trial detention is around 75%. This rate is alarming when you consider that the threshold at which we speak of a malfunction of the criminal justice system is 30%. We can then understand that the right to equitably access justice is unreal for a large number of people in pre-trial detention because of the judicial investigation which can take any undefined duration. The only chance of rescue for the litigant would be statutory release if the pré-trial detainee already spent a time greater than or equal to half of the maximum penalty, or parole. In reality queries toward the latter freedom are rarely successful. It is further necessary for the pre-trial detainee to be aware of these remedies because most of the time they do not have a access to lawyers to assist them.

The Togo YMCA organized from June 12 to 13, 2014 in a hotel in Lomé this seminar on the theme of « respect of human rights and justice administration. » in view of strengthening the technical and operational skills of the actors of criminal chain for appropriate enforcement of legal provisions in criminal proceedings in order to safeguard the rights of detainees.

« Whatever our position, let’s make sure nothing else happens to people in custody on remand, in pre-trial detention or serving a sentence of detention because they are already  fragile due to the loss of freedom of movement … « , an excerpt of the speech delivered by Mr. Kossivi EGBETONYO, the Director of Cabinet of the Ministry of justice and Relationships with Institutions of the Republic, who on behalf of the Ministry of Justice during the opening used the opportunity to  launch this appeal to the  participants in the presence of representatives of the European Union,  Office of the High Commissioner for Human Rights, National Human Rights Commission and other Human Rights organizations in Togo including Handicap International.

In his address to the occasion, Mr. Guido CARRARA, Political Counsellor at the Delegation of the European Union in Togo showed his concern about the resurgence of the phenomenon of popular condemanation and especially the way the media treats the events which do not respect human dignity in the publication of images. Mr. CARRARA has not failed to notice the silence and inaction of Human Rights organizations to this phenomenon.

During the work the participants benefited three presentations given by experienced lawyers and magistrates on the following themes: (1) collaboration between judges and criminal police officers in the criminal procedures, (2) the desirability of accusation and (3) guarantees of the rights of the accused person during a criminal trial. Debates on the popular condemnation showed that one of the causes of this phenomenon can be sought in the loss of trust between the population and the justice system. It has been suggested that sensitization actions are carried out towards the population so that they understand that no one has the right to take the law into his / her own hands under any circumstances; and the actors of justice sector should do all they can to re-build the confidence.

The final stretch of the workshop was devoted to a round table that allowed participants to discuss the internal and external challenges to the body to which they belong. This was preceded by the analysis within groups intersections. In summary we note that all bodies of the sector reminded the need to improve working conditions including through the provision of rolling stock, documentation and airtime…. They also mentioned the need for ongoing training and establishment of framework for exchanges between the various actors in the criminal chain. But we should add other items such as integration into the draft of the new Penal Code and the Code of Criminal Procedure, of provisions strengthening the protection of the arrested / accused person including the right to be assisted by lawyer since the first minutes of the preliminary investigation, as per Article 16 of the Constitution of the Republic, the definition of alternative sentences to deprivation of liberty, the rapid adoption of a prison and reintegration policy.

For the organizers, the recommendations will be shared with the authorities to continue advocating so that the situation evolves towards decision of measures and arrangements to better protect the rights of persons in police custody and pre-trial detention.

This seminar is part of the implementation of the project « Support to human rights … », funded by the European Union and Y care International amounting to 571,642 Euros for three years.