FLASH >
Accueil > ENGLISH POSTS > ebola, what is it? 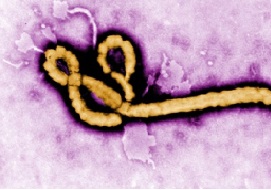 The virus has a long incubation period of approximately eight to 21 days. Early symptoms include fever, muscle weakness, sore throat and headaches.

As the disease progresses, the virus can impair kidney and liver function and lead to external and internal bleeding. It’s one of the most deadly viruses on Earth with a fatality rate that can reach between approximately 50 to 90 percent. There is no cure.

How Is It Transmitted?

The virus is transmitted through contact with blood or secretions from an infected person, either directly or through contaminated surfaces, needles or medical equipment. A patient is not contagious until he or she starts showing signs of the disease.

Thankfully, the virus is not airborne, which means a person cannot get the disease simply by breathing the same air as an infected patient.

Where Did the Virus Come From?

Certain bats living in tropical African forests are thought to be the natural hosts of the disease. The initial transmission of an outbreak usually results from a wild animal infecting a human, according to the WHO. Once the disease infects a person, it is easily transmissible between people in close contact.

Until this outbreak, approximately 2,361 people had been infected since the disease was identified in 1976. More than 1,548 of those infected died from it.

Who Is At Risk?

The virus is not airborne, which means those in close contact can be infected and are most at risk. A person sitting next to an infected person, even if they are contagious, is not extremely likely to be infected.

Health workers and caregivers of the sick are particularly at risk for the disease because they work in close contact with infected patients during the final stages of the disease when the virus can cause internal and external bleeding.

In this outbreak alone, more than 100 health workers have been infected and at least 50 of them have died, according to the WHO.

How Do You Get Ebola?

Ebola isn’t as contagious as more common viruses like colds, influenza, or measles. It spreads to people by contact with the skin or bodily fluids of an infected animal, like a monkey, chimp, or fruit bat. Then it moves from person to person the same way. Those who care for a sick person or bury someone who has died from the disease often get it.

Other ways to get Ebola include touching contaminated needles or surfaces.

You can’t get Ebola from air, water, or food. A person who has Ebola but has no symptoms can’t spread the disease, either.

What Are the Symptoms of Ebola?

Early on, Ebola can feel like the flu or other illnesses. Symptoms show up 2 to 21 days after infection and usually include:
• High fever
• Headache
• Joint and muscle aches
• Sore throat
• Weakness
• Stomach pain
• Lack of appetite

As the disease gets worse, it causes bleeding inside the body, as well as from the eyes, ears, and nose. Some people will vomit or cough up blood, have bloody diarrhea, and get a rash.

How Is Ebola Diagnosed?

Sometimes it’s hard to tell if a person has Ebola from the symptoms alone. Doctors may test to rule out other diseases like cholera or malaria.

Tests of blood and tissues also can diagnose Ebola.

If you have Ebola, you’ll be isolated from the public immediately to prevent the spread.

How do you prevent infection?

According to the Mayo Clinic the best preventive measures are to:

• Avoid areas of known outbreaks.
• Wash your hands frequently. Use soap and water, or use alcohol-based hand rubs containing at least 60 percent alcohol when soap and water aren’t available.
• Avoid bush meat.
• Avoid contact with infected people.
• Avoid contact with the person’s body fluids and tissues, including blood, semen, vaginal secretions and saliva.
• Wear protective clothing, such as gloves, masks, gowns and eye shields. Keep infected people isolated from others. Dispose of needles and sterilise other instruments.
• Don’t handle remains. The bodies of people who have died of Ebola are still contagious.