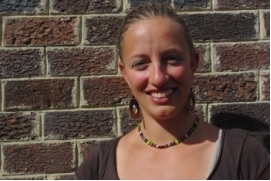 “Local is lekker (nice) but Global is better”, a saying synonymous with those South Africans aiming to go beyond their borders with their work and influence. While some may argue this, my years in the YMCA have shown this to be true. A lot of African languages use the name – “Mzungu” to describe a white person, my story as a “Mzungu” in Germany, Africa and the World has truly been amazing to say the least. I have become an “International Mzungu” indeed.

You could say that I have “triangles in my blood”. I virtually grew up in the Baden YMCA in Germany. My dad was very involved with the YMCA and so I participated from a young age in kids clubs, and later, youth and sports groups. Between the ages of 14 and 15 I became a leader. Looking back, my involvement gave me a purpose and helped me make friends… it kept me safe through my teenage years. Being in the YMCA, gave me space to discover my talents, my passion of working with people and grew my faith in Christ. This led me to my professions, first as a kindergarten teacher, and later on, a social worker. However, everything was local and I got the impression that there was little else beyond my experiences. I didn’t have a global mind-set. Little did I know that soon this would change when I saw the YMCA as it truly is, a massive world-wide movement.

In 2011, I travelled to Zimbabwe, a country I knew almost nothing of even though it had always been my dream to visit Africa. I had previously heard of Zimbabwean President, Robert Mugabe, but that was all. My local Baden YMCA’s 20 year partnership with the Zimbabwean YMCA became a great starting point and soon I was on my way.

I stayed in Zimbabwe for 2 months and during this time my experiences changed me in ways I wasn’t ready for. Things I had taken for granted back home suddenly became a treasure, from water (which was not always a given when I opened a tap) to the right and freedom to association or free speech. Seeing how people struggled, fighting for survival from day to day, gave me a new appreciation of my life back home and the opportunities young people have to become who they want to be.

Between that time and now, I have, through my S2C Training, engaged with young people throughout Africa, from South Africa to Nigeria and beyond. My interactions with these fellow ambassadors has allowed us to share our lives and experiences. Our challenges became our shared concerns and our greatest desires became the empowerment of young people throughout the world and the YMCA. I have committed myself to stand for all youth, not just in my local vicinity but in my global community. Knowing that a young girl, somewhere in Africa, can’t go to school for no other reason than she is a girl or that a 10 year old boy is forced to swap school books for a rifle, makes me want to do all I can to change their fate. My encounter with all my African brothers and sisters has led me to ask – How are we, as young people in Germany, using our opportunities and liberties to make the world we live in a better place? The youth I met in Africa showed resilience, they chose to be ‘citizens’ rising above their challenges to make a difference in their communities and the world. While accepting that we all have challenges, how are we taking charge to bring about change?

I have learned to think globally and act locally, to be responsible and influential in my little corner of the world because our actions have a ripple effect that can change and touch lives beyond our furthest borders.