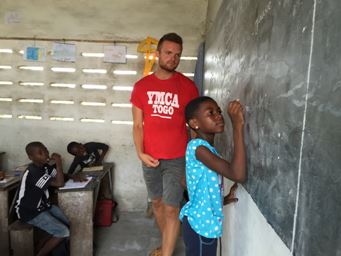 As ICS volunteer in Togo from January to April 2016, Conor spent 12 weeks in Togo, working with the YMCA . International Citizen Service (ICS) is a once-in-a-lifetime volunteering opportunity open to all 18-25 year olds, funded by the UK Government. It’s a development programme that brings together young people from the UK and developing countries to volunteer in some communities in Africa, Asia and Latin America. Conor wanted to do some good in the world by participation in ICS programme. The following is the story of Conor’s participation.

« My name is Conor Scutts, a 22 years old from Nottingham, England. I am in training to become a teacher in the UK, and primarily thought this would add to my experience well; but also simply to do some good in the world, I was going through a bit of a rough time in England and wanted to do something to put my problems into perspective, I wanted to leave here appreciating my life at home more.

Here we have focused heavily on education, with English and health as our two main focal points. Aside from these, we had a development project in which we decided to aid a local dispensary in purchasing some much needed supplies; a door-to-door awareness raising project, after which we eventually bought birth / nationality certificates for 75 local people in need; and also youth work around the city including sessions in a local youth prison, and open activity afternoons at the YMCA center.

The experience here has been somewhat of a rollercoaster. I have thoroughly enjoyed living in my host family and the experiences that come with that, also the classes themselves and the relationships you build with schools pupils are memories I will hold with me for a long time. However, there have also been more difficulties than I perhaps anticipated beforehand, including communication issues and just the way things are done / handled in a completely different culture. I’ve needed a lot of patience during my stay, however some of the results when it is all said and done have made it all worth it for me.

I’ve learnt a lot during my stay here in Togo, mainly about the culture and way of life here which has been really interesting for me. Also the languages here, I personally took a strong interest in picking up both French and even a little Ewe – in both of which, but French especially I’m very proud of my progress and will look to continue once I am back in the UK. I would say that I have had more growth personally than necessarily with the skills I had looked to develop from the beginning; this time away gives you a good chance to reflect on your life at home and plan for the future, for which I have been grateful for.

I wouldn’t say that the experience has changed me, just helped me decide upon my future which I suppose is a big enough affect in itself. Perhaps my patience or open mindedness to new and different approaches has improved, time will tell. This has been an experience I won’t forget, that’s for sure.

My main long term goal is to be successful in my career of choice as a teacher, to continue to build on my existing experience at home and go on to my post graduate degree in Primary Education, also to keep in contact with certain projects here, such as an orphanage I spent several nights and the Primary school which I worked in, and managed to twin with my own primary school back in England (an achievement that I was very proud of). »