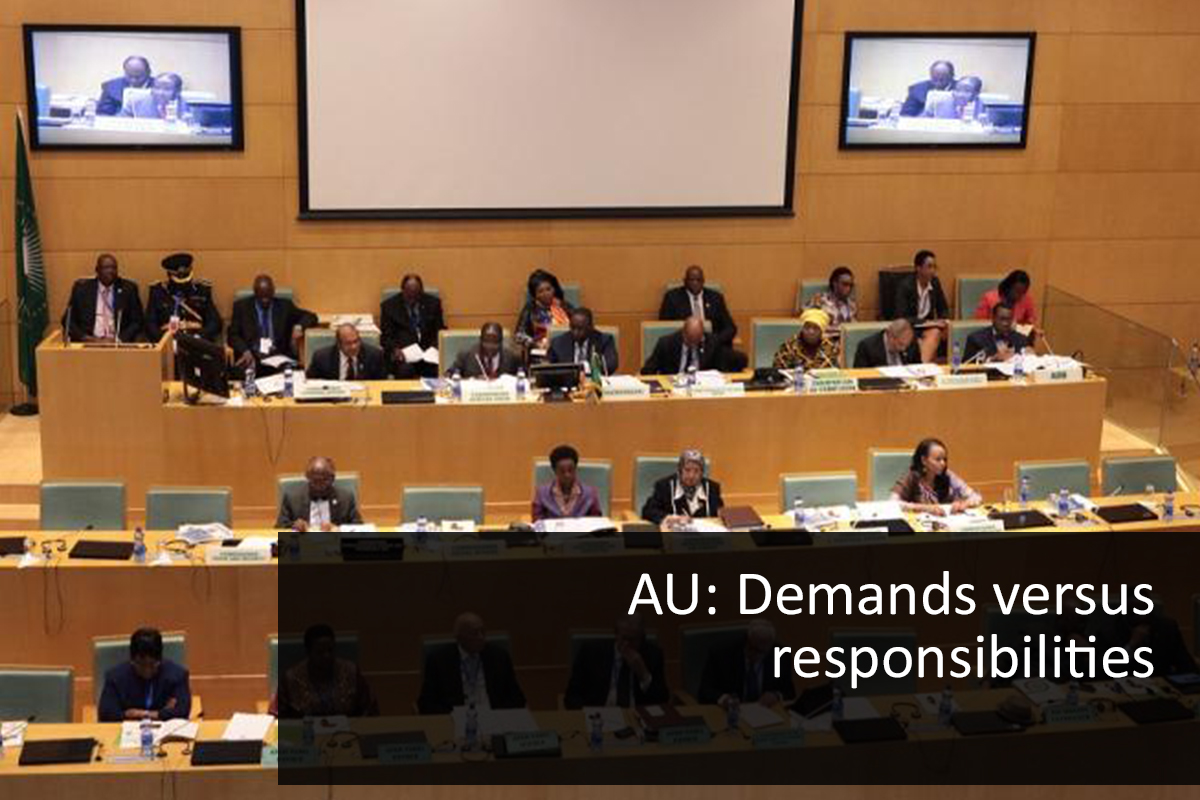 ‘Youth must learn that demands come with responsibilities,’ said AU Chairperson, Nkosazana Dlamini Zuma, during her address to youth leaders of different African organisations during this year’s African Union Inter-generational Dialogue held in Addis Ababa, Ethiopia, from 27-28 January 2016. The Inter-generational Dialogue between youths, Heads of State and Government, and key continental and global institutional leaders was organised by the AU Youth Division and is one of the ways envisaged as a platform for improving the contact between youth and key policy makers in order to achieve understanding and solidarity between them. This year’s Inter-generational Dialogue assembled over 200 youths, delegates, ministers and Heads of Institutions under the theme: “Harnessing the Demographic Dividend in Africa towards the realisation of Sustainable Development Goals and AU Agenda 2063.” It provided a platform for the voices of young people to be heard by decision-makers at the highest level; facilitating dialogue between generations which in the long run will promote an attitude where challenges are seen as opportunities, instead of focusing on the negative consequences that might appear.

Addressing the high level meeting H.E. Dr. Martial De-Paul Ikounga, Commissioner for the AU Human Resources Science and Technology (HRST), welcomed the African youths representing the five regions of Africa and the Diaspora. He said the theme of the meeting was pertinent as it was in line with the theme of the 2017 Summit. The commissioner underscored the fact that the development of Africa required harnessing the full potential of its youth, both girls and boys: “The potential of our youth must be unleashed for the sustainable development of Africa,” he said.

He highlighted that youth were called upon to make the most of this opportunity not to be limited to only expressing themselves, but also to focus on taking ownership of Agenda 2063 while ensuring that their voices and concerns are taken into account in the African policies, frameworks and charters put in place for youth development. Commissioner Ikounga reiterated the efforts done by the AU Commission to transform the Youth Volunteer into African Professionals. He called upon the African youths to be concrete and pragmatic in their decision-making processes. “View yourself in the proper context: there are many youths out there that did not have the privilege of attaining this meeting with high dignitaries. You should therefore align your interests with those of the ordinary youths and make solid decisions that will transform the lives of all African Youths,” he concluded.

Speaking on behalf of African youth, Ms. Francine Muyumba, President of The Pan African Union (PYU), appreciated H.E. Dlamini Zuma and the Commission for all their flagship projects towards empowering African youth. The on-going dialogue with the African Leaders and young people is a rare opportunity: “We represent more than 60% of the continent’s population, and therefore as majority we should be given higher priorities in all spheres, be it economic, education, health and peace and development,” highlighted Muyumba.

Noting in her address that it has been almost 10 years since the adoption of the African Youth Charter in Banjul declarations; she said it was time youth hold their individual governments accountable for the implementation of all actions and policies. We must develop plans for action to achieve together with the AU Agenda 2063, particularly Aspiration 6 which stipulates an Africa whose development is people-driven, relying on the potential of Africa people, especially its women and youth.

During the event youth deliberated and shared recommendations on the various themes while also campaigning for a youth envoy slot at the African Union and 10 percent youth representation at all commissions at the African Union. An underlining theme in most of the discussions was how youth viewed themselves.

Participants who spoke emphasised the need to build on the capacity, energy, vigour of young people towards innovation and entrepreneurship. They also spoke of the need to take advantage of industrialisation and our own mineral resources rather than exporting these resources in exchange for arms to fund our internal and civil wars.

During discussions, youth emphasised the issue of radicalism and the need for religious fluency, youth action and participation in agriculture, the urgent need to return abducted young girls and women in Nigeria, and access to training and jobs.

As the curtains closed on the event there were murmurings and discontent from some participants due to the absence of a sitting head of state during the dialogue. Others felt the discussions with the older generation were unsubstantive, one-sided, and fruitless. In future there is need for organisers to add more content and create synergies with other progressive youth movements as the event was marred by some officials trying to dictate the proceedings. Overall it was an amazing, knowledge rich opportunity to interact with great youth minds and network with the older generation.

The Role of Volunteers, Board and Staff in YMCA Sustainability