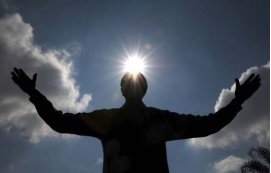 The Nelson Mandela Foundation said this year will focus on literacy, shelter and food security – which remains a global concern.

The day will be commemorated with a host of activities in every corner of the country, with more than 1 000 events planned that are connected with the international day.

President Jacob Zuma will be taking part in Operation Clean-Up at the Nelson Mandela School of Science and Technology in Mvezo near Mthatha in the Eastern Cape.

Zuma urged all to demonstrate their love for the country by cleaning their surroundings.
The Department of Women will take part in efforts to make every day a Mandela Day by cleaning and imparting valuable skills to women.

Shabangu’s department will be at the Porter’s House for Women and Children and The Rivoningo Care Centre in the City of Tshwane, where two legacy projects including sewing and gardening will be initiated.

Trade union Cosatu will commemorate the memory of Madiba by cleaning at the Barrage Primary School in Vereeniging and the Senior Citizen Household in Benoni on the East Rand.

Cosatu national spokesperson Patrick Craven said: “Despite becoming an international icon, Mandela remained a humble and modest servant of his people, who never put his personal interests before his commitment to the struggle to transform the lives of his fellow South Africans.”