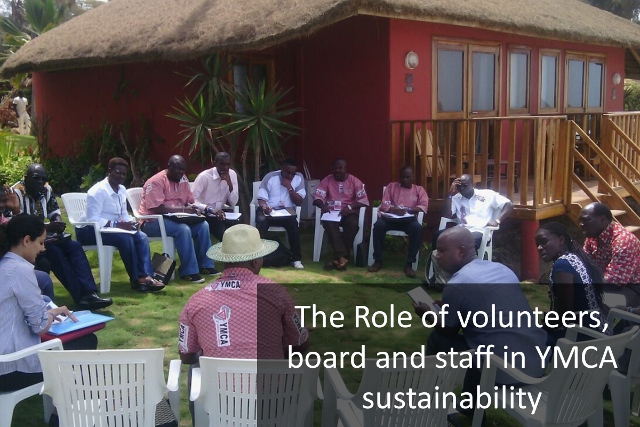 I was very motivated and inspired today during the OGM discussions on the role of volunteers, board and staff on the sustainability of the YMCA movement. At the start of our discussions, the session facilitators clearly explained the roles of each:

Staff within the YMCA movement fulfils the role of projecting the achievements towards the mission and vision of the movement through effective communication between members, volunteers and the board.

They communicate and implement the activities best aligned to the vision and mission. During our discussions we realised that many staff are not as active as they could be because they lacked interest in learning, understanding and implementing activities youth would participate in. Our solution to this problem was to recognise the need for staff to be reoriented and monitored on the mission and vision of the movement. It was also suggested by the facilitators that recruiting staff within the movement could help build a stronger and more effective strategic implementation of our vision.

In our discussions, volunteers were acknowledged as being very important to the movement because they actively participated in implementation and played a major role before, during and after programmes or activities. Because of this, their importance should be recognized, and they should be strategically positioned to help raise funds to support our local and national movements since most volunteered lived in the communities in which we operate. As suggested by the facilitators, some volunteers could be troublesome to work with, but it would better serve the movement to engage with them in activities or programmes of their interest so that we could change their mindsets and empower them to join the movement.

Furthermore, the role of the board in YMCA sustainability was to oversee the day to day operations of the movement by designing and implementing effective structures and strategies that could monitor and evaluate the adherence to our vision and mission. In addition, the board could help build strong lines of communications between the Staff and Volunteers in order to support our contribution to the African Renaissance.

During the session, we gathered together in groups to discuss the topic; “Building strong and diversifying partnership” in the movement. By the end of the discussion we had come to the following conclusions:

Now I feel personally empowered in my role as a follower or leader to work effectively towards achieving the movement’s objectives. Working in groups with the Elders and National General Secretaries built on my confident and equipped me with the skills needed to approach any future stakeholder or authority. The group work also encouraged me to believe in friend-raising rather than fund-raising because it is only through good relationship or friendship that funds are successfully raised. As an S2C Ambassador, I have experienced the change within myself and am fully prepared to empower other youth, current and potential volunteers, and members in the YMCA movement so that people can positively change their own mindsets and transform themselves and their communities for African Renaissance.

Garissa terrorist attack : We say; Give Peace a Chance (#147notjustanumber)