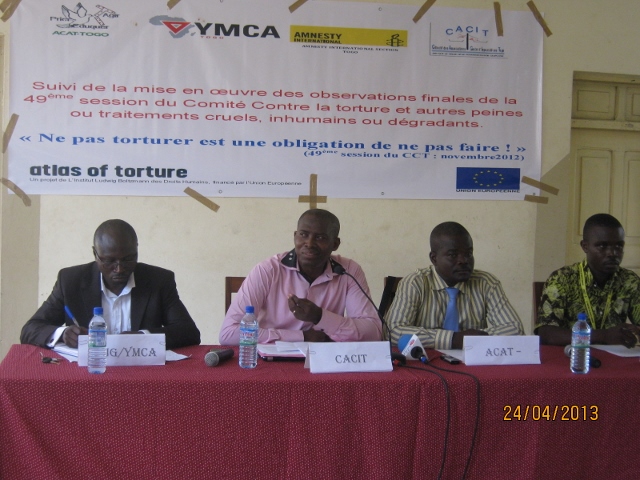 The organisers noticed progress in the implementation of recommendations six months after Togo submitted its second periodic report to the CAT which formulated final observations to Togo. According to Pierre Claver Dékpo, president of ACAT, authorities took measures towards the implementation such as the reduction of over population in prisons (by the end of 2012, 562 detainees were released), the ongoing revision of penal code and penal procedural code, a national workshop on the revision of the organic law of National commission of human rights (CNDH) in order for the commission to welcome the national prevention mechanism of torture (NPM). Mr Dekpo also mentioned the release of some of people involved in the case of damage to the state security in April 2009.

He also noticed that beside this progress, civil society organisations remain highly concerned by the delay or absence of implementation of recommendations which are qualified urgent by the CAT.

The four organisations found it necessary to make sure the implementation of the recommendations are made by the authorities and accompany them in that work, said Mr Gerard Atohoun, the National General Secretary (CEO) of YMCA Togo.

Apart from media professionals, representatives of Ministries of justice, human rights and security and the one of high authority of audiovisual and communication (HAAC) took part in the event. Also present were representatives of institutions like European commission delegation in Togo and two members of the team of the Atlas of Torture project. The Atlas or Torture project is run in four countries, including Togo, by the Ludwig Boltzmann Institute of Human rights, Vienna.

Being present and engaged – my experience as a father