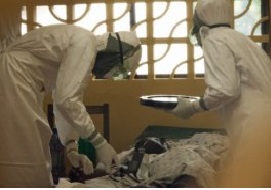 While attention remains firmly focused on Western Africa as it grapples with the surging Ebola outbreak in the region, World Health Organisation head (WHO) Margaret Chan, has warned that the disease is spreading quicker than efforts to contain it. Officials working on treatment, prevention and containment have called the outbreak the « most severe » of its kind in recorded history and have stated that further failure to stem the spread of the disease could be devastating to the region. « If the situation continues to deteriorate, the consequences can be catastrophic in terms of lost lives but also severe socioeconomic disruption and a high risk of spread to other countries, » Chan stated.

One of the largest difficulties those attempting to contain the disease face is the loss of medical personnel to the infection. In particular, those working directly with patients are at high risk of contracting the disease through transmission of bodily fluids. In Sierra Leone, the leading specialist in the fight against the disease, Dr Sheik Umar Khan, as well as three nurses on his staff, have died after treating isolated patients in Kenema Government Hospital, while in

The spread of the disease:

To date, the virus has been detected in Guinea, Liberia, Nigeria and Sierra Leone.

The disease has spread rapidly since the first reported cases in Guinea in early February 2014. As the spread continued in the region, international aid increased and on 31 March, the highly specialised USA Centres for Disease Control team travelled to Guinea in an effort to assist the Guinea medical response and lead international aid.

During this time, late March to mid April, Liberia’s Ministry of Health and Social Welfare had released details of possible infections in the Margibi and Montserrado County. While it had initially appeared that transmission had been arrested, new cases were reported between 23-27 May and the spread to neighbouring Sierra Leone was confirmed. By Mid-June, the virus had reached Monrovia, Liberia’s heavily populated Capital City.

Within in month, Sierra Leone became the most heavily affected region, with 158 cases reported by 20 June and by 27 July, transmission of the disease has continued to spread within the affected regions.

Guinea, Liberia and Sierra Leone have all called a State of Emergency in order to facilitate treatment and further spread of the disease.

While the disease continues to spread, the USA is currently evaluating the potential of newly developed Ebola vaccine. While people call for the release of vaccine, USA president has urged caution. ABC News reports:

Obama said the experimental Ebola serum given to two patients in the US will continue to be tested because it is too soon to know whether the treatment is successful.

« We’ve got to let the science guide us and I don’t think all the information is in on whether this drug is helpful, » he said. « The Ebola virus both currently and in the past is controllable if you have a strong public health infrastructure. »

The priority, Obama said, was devoting resources to fighting the disease in the region. « Let’s get all the health workers we need on the ground. Let’s nip as early as possible any additional outbreaks of the disease, » he said.

« During that process, let’s see if there are additional drugs or medical treatments that can improve survivability of what is a very brutal disease. »

The US president said the continent continues to face many challenges, but a new, more prosperous Africa is emerging.

Earlier on Wednesday, Obama called on African nations to be forceful in solving healthcare, security and government corruption problems that hinder progress on the continent.